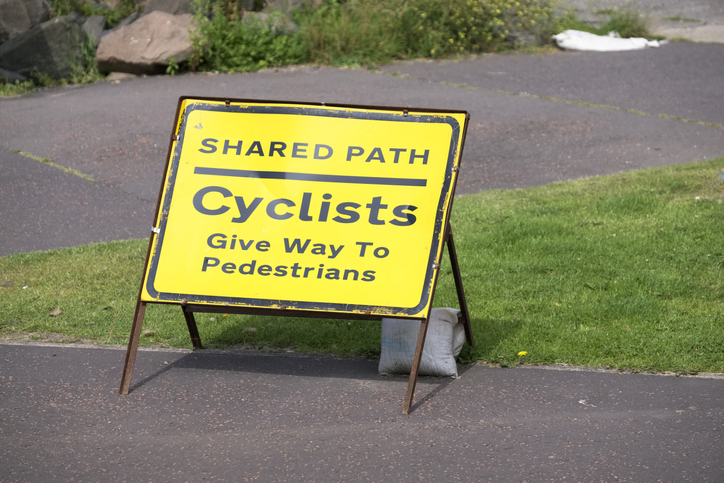 What to Do After a Bicycle and Pedestrian Crash

The laws regarding whether a bicyclist can legally ride on sidewalks differ not only from state to state, but also city to city. Thus, making it impossible for the bicyclist to know where they can or cannot ride. Here’s what happens if a bicycle and pedestrian crash, depending on where.

For example, it is NOT legal in Santa Monica to ride on sidewalks. Santa Monica Municipal Code Section 3.12.540 states:

“(a) It shall be unlawful to ride a bicycle or to coast in any vehicle upon any public sidewalk.”

However, in Los Angeles, bicyclists are allowed to ride on sidewalks, but not in a “willful or wanton disregard for the safety of persons or property”.

According to the Los Angeles Municipal Code section 56.15(1),

“No person shall ride, operate or use a bicycle, unicycle, skateboard, cart, wagon, wheelchair, roller skates, or any other device moved exclusively by human power, on a sidewalk, bikeway or boardwalk in a willful or wanton disregard for the safety of persons or property.”

A Bicycle and Pedestrian Crash

So, what happens if there is an accident between a bicyclist and a pedestrian on a sidewalk? Chances are neither party has insurance. The bicyclist might have insurance on the bike and helmet if their bike is a primary means of commuting.

However, it’s a slim chance the bicyclist will have insurance, which means if there are injuries, there will be a fight on whose fault it was. If a pedestrian comes out of a storefront at the same time the bicyclist arrived at that point, who’s at fault?

After a bicycle and pedestrian crash, for the pedestrian or bicyclist to be able to get compensated for their injuries, they will have to do the following things:

Learn More about What Happens After a Bicycle and Pedestrian Crash

If you are the bicyclist or the pedestrian in this situation, contact us to evaluate your case.